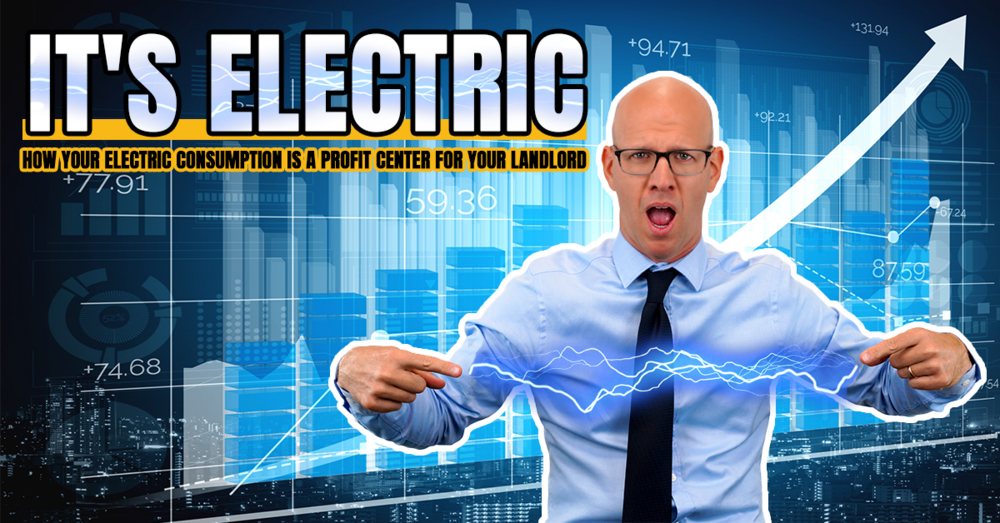 There are so many different costs associated with an office lease outside of the base rent. Many of these can add up to real dollars!  It is important to know what is going into your office lease. This is for two reasons: 1) so that you can make an apples-to-apples comparison when considering the space that works for you 2) to understand what your costs are upfront so there are no surprises once you have signed a lease.

Today I want to address electricity because if negotiated incorrectly, it could be a profit center for the landlord. There are going to be situations where some of these are not available, but it’s better to be an educated consumer and ask, rather than assume what is proposed to you is the only option.

There are three options for electricity. These include ERIF, Submetering, and Direct Metering — only one of these is not a moneymaker for your landlord.  So, let’s get into it:

ERIF stands for Electricity Rent Inclusion Factor. Despite it saying rent inclusion. It does not mean it’s included in your base rent. It does mean that there is a number that you pay per square foot. In New York City this number is between $3.00 – $3.50 per square foot regardless of how much or how little electricity you use.  More often, this is typically found in the leases of smaller spaces. Usually, the base per square foot electric amount contained in the lease is subject to increase based upon the landlord’s electrical consultant’s periodic estimate or survey of the tenant’s electric usage. To the extent that the landlord’s survey reveals that the tenant has more than ordinary office equipment, has other than ordinary hours of usage, or uses watts per square foot higher than allocated, then the electric charge will be increased.

The current market base rent inclusion electric amount is in the $3.00 – $3.50 per rentable foot range. The base charge usually includes:

It is important to note that since rent inclusion is charged per rentable square foot, its effect is made worse because of office space loss factors.

With this electricity clause in your lease, you will be charged based on how much you use. So, how much? Well, less than ERIF. Winner!

Many buildings are wired with a single master meter connection to the public utility. From its master meter, a landlord can re-distribute electricity to its various tenants and record their usage with individual tenant meters (submeters). The landlord becomes essentially a mini public utility.

At the end of each month, the landlord or its consultant reads each submeter and bills the tenants usually after adding on a mark-up commonly expressed as a percentage above the landlord’s electric cost per kilowatt-hour.

Landlords justify their markup based on costs such as line loss, meter reading, bookkeeping, billing, and collections. Landlord markup ranges from zero (in rare cases) to as high as 35% with 5% – 15% being the most common range in the current market. My job is to negotiate to as low a number as possible.

Please note: If the space isn’t sub-metered already, it is important to ask in the lease for the landlord to install the submeter at its cost

In its simplest form, you pay for what you use, and your bill comes from the utility (think ConEd) directly. You (the tenant) pay for its electricity directly to the public utility based upon an electric meter that the public utility reads each month much the same as a home electric bill. There is a straightforward calculation shown on the bill of the cost per kilowatt-hour charged by the utility multiplied by the number of kilowatt-hours of usage by the tenant. The landlord in this instance is removed from the electric equation often resulting in substantial savings to a tenant compared to submetering and rent inclusion.

It is important to note that submetering and rent inclusion can both be altered to the landlords’ advantage to increase their profits at the tenant’s expense. For example, a landlord might provide sub-metered electricity but charge the tenant a published electric rate that is higher than that being paid by the landlord. Similarly, in a rent inclusion clause, a landlord may increase their profits by providing a very narrow definition of ordinary office equipment or by shortening ordinary business hours or by agreeing to provide watts per foot below that amount generally required for ordinary office use.

Short story: Electricity can be a profit center for the landlord. Negotiating the electricity clause as a tenant before you enter your next lease can save you a ton of money. Better in your pocket than theirs.

And to review; from a tenant’s perspective, the most to least favorable method covering electric billing is direct meter, submeter, and then rent inclusion.